In 2017, the United States Justice Department sued Eastpointe, MI under the Federal Voting Rights Act. As a result of this lawsuit, in their 2019 elections, Eastpointe residents will vote using ranked-choice voting (RCV) and elect their city council under a new voting system called proportional representation (PR).

History of the lawsuit
and why PR was adopted.

Lopsided election outcomes weren’t the only problem in Eastpointe, however. These are some quotations from the Department of Justice’s filing in federal court: 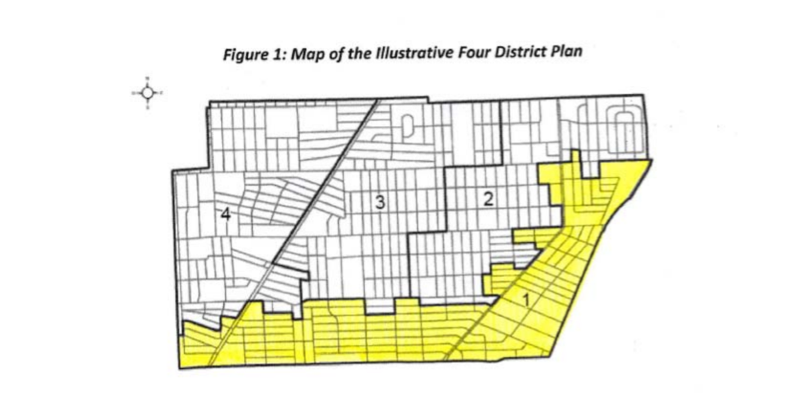 However, the city of Eastpointe is now 46% black. Though switching to a district system would ensure 1 of the 4 city councilmembers would be black, if Black People voted together, that would not be representative of the population. Moreover, adopting such a system would have implicitly designated one part of Eastpointe as “the black neighborhood,” while the other three districts would be “the white neighborhoods.” African Americans living in the white neighborhoods would know the election of white candidates from their districts were foregone conclusions.

Instead, the Department of Justice proposed something different: proportional representation. By using ranked-choice voting, where voters are allowed to rank candidates in the order they prefer (1st choice, 2nd choice, 3rd choice, and so on), elections outcomes will mirror how the city votes: the majority of the city will still win seats, but they won’t win all the seats.

Why RCV?
How does it help?

In most elections, voters are asked to pick one candidate, mark a vote for them, and move onto the next election. One problem with this method of voting is that it often fails to capture how people really feel. Often, a voter may really like one candidate, but also think another candidate is  pretty good, and would be okay with another. Sometimes, voters only really don’t like one candidate.

Ranked-choice voting addresses these problems by allowing voters to indicate support for candidates in order of preference: their first choice, who they like best, their second choice, who they may think is pretty good, and a third choice, who may be their least-favorite but still better than the alternative.

What ranked-choice voting means is that a voter can honestly support their favorite candidate, but if that candidate can’t win – perhaps because they’re a long-shot, or it’s a very close race and they don’t have quite enough votes – that person’s vote will instead count for their second-choice.

How does RCV and proportional representation work?
In Eastpointe, two city council candidates will be elected.

Under the old system, 50% of the vote (plus one) had the power to elect each candidate, which meant that the same group of voters elected all four city councilmembers while the African American population, 46% of the city, almost never elected any candidates.

Under proportional representation, all members of the city have the power to elect a candidate. Instead of running for individual positions (City Council Position 1, City Council Position 2), all candidates are  running in one big pool for City Council. Now, instead of 50% of the vote (plus one) electing a candidate, 33% of the vote (plus one) has  the power to elect a candidate. This gives all communities a chance to win a number of city council seats reflective of their size in the population.

Let’s look at a sample ballot.

In each round, we check to see if any candidates have enough votes to win one of the two seats. Remember, 33% of the vote (plus one) is all it takes to win a seat. If any candidate has enough votes, they are immediately elected and we go to the next round. Remember, so far we are only counting voter’s first choices.

If no one has enough votes to win, we eliminate the candidate in last place, because they did not have enough support to win. Then, we go back to just the ballots that indicated the now-eliminated candidate was their first choice. Since that candidate is now out of the race, those ballots now go to whichever candidates were listed as their second choices.

The next step in a proportional ranked-choice voting election is to look at a candidate that has more votes than they need to win. Votes beyond what a candidate needs to win are called “surplus votes.”

If a voter’s top-ranked candidate is elected and receives more votes than they need to win, each of that candidate’s voters has a portion of their vote count for the next person ranked on their ballot.

Why do we need to do this? Because the goal of proportional representation is to make sure the election outcomes reflect as closely as possible the will of the voters. Imagine if one candidate was so popular that they received 80% of the vote, more than double what they actually need to win. If we did not look at surplus votes, 20% of the city would elect the other city councilmember, which would obviously not reflect the will of the voters.

Both of these processes help make sure as many votes as possible count in the election. This process continues until both seats are filled or a ballot has no more ranked candidates.

Why does the process stop once two candidates are elected?

Once two candidates have the support of over 33% of the voters, over two thirds of voters are accounted for. All that leaves left are less than a third of voters, under 33%. This means it is not possible for them to push any other candidate to the minimum needed to win – 33% of the vote (plus one), and so the election concludes.

Your vote is your voice. If you have a favorite candidate, and have another candidate that you like a lot but that’s only your second choice, you should indicate so on your ballot. By doing so, your ballot will show how you truly feel and the odds you elect a candidate you support go up.